Posted on May 24, 2013 by Graham Richmond in News No Comments 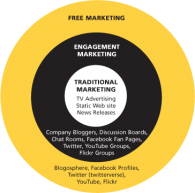 I recently reread a whitepaper written by Alex Brown, a former colleague of mine who spent seven years in admissions at the Wharton School.  It features critical advice on how to embrace social media and crowd-source some of your marketing.

What’s amazing about this white paper is how it continues to be highly relevant to the MBA admissions community – despite originally being drafted in 2006 and conceived back in the 2004-05 admissions cycle.  The version featured here was updated in 2009 to include more information about Facebook and Twitter.

While most MBA programs dabble in multiple social media channels only a handful are consistently and effectively cultivating “free marketing” from the masses.

“Where traditional marketing is a one-way conversation punctuated with focus groups for feedback, engagement marketing is a true dialog where anyone can speak—and everyone can listen.”

via Engagement Marketing Revisited: How to Embrace the New Social Media Tools | Zehno.