Posted on December 11, 2013 by Graham Richmond in News 2 Comments

Last month I was invited to present the findings of the Southwark Social Media Survey at GMAC’s Europe, Middle East & Africa (EMEA) Conference in London.  This three-day event brought together nearly 60 business school representatives from over 30 leading business schools in the EMEA region.  There were also nearly 20 panelists ranging from ‘Workplace Futurist’ Rick Von Feldt to Financial Times Business Education Editor Della Bradshaw.  And, of course, the event was ably staffed by 10 or so GMAC professionals who ensured that everything was well choreographed.

The theme of this year’s EMEA conference was “Business As (Un)usual: Attracting and Selecting Business School Talent”. Needless to say, the group of management education professionals assembled engaged in a lot of eye-opening discussion while enjoying the grounds of the Honourable Society of Gray’s Inn.  If I had to share a keyword list that best mapped the subjects covered in lectures, panels and discussions, it would probably look something like this:

Of course, keywords don’t do such a great job of fleshing out the extent to which these topics were explored, so for that I will offer a brief recap of some key elements of the event.

Opening Keynote: The 2020 Workplace
This keynote, delivered by Rick Von Feldt, walked conference attendees through the key factors that are influencing the changing landscape of today’s workforce and workplace – with an eye to understanding how business schools might prepare leaders for the future. Rick focused on four key factors that are driving change and shaping the future of corporate culture: ‘Technology Changes Everything’, ‘The World Is Social’, ‘Globalization’ and ‘The XY Factor’ (Gen X and Y in the workforce). He pushed the audience to engage in some predictions about the future of management education and pointed to 13 key signals that he has identified as being critical in shaping the 2020 education landscape. These signals ranged from the increasingly global nature of candidate sourcing to questions around delivery method, a more democratic workplace, social learning, and the battle for talent.  While no one can predict the future, this session did a good job of identifying the trends that are likely to play major roles in shaping the future of management education.

The Use of Social Media in Business School Marketing and Admissions
This was the session that I led, unveiling the results of Southwark’s study of 35 leading MBA programs and how those programs use key social media outlets like Facebook, Twitter and YouTube. I was joined by guest panelists Luciano Rolon (HEC Paris), Steven Cousins (CASS Business School) and Danny Masting (Zone Digital) and together we explored the implications of the findings in Southwark’s survey, weighing in on why some schools were successful at generating large – and highly engaged – followings in certain social media channels. We also discussed other important virtual places that discussion with prospective students is taking place – be it in MBA community sites/forums, blogs, etc. One key takeaway from the research was that schools seem to do best when taking a consolidated approach to their social media efforts (e.g. one Facebook page for both applicants and alums) so as to allow for cross pollination. Another key point that came out of the session was around the intimacy of connections and discussions that take place in many social media outlets (via comments, direct messages, and the like).

MOOCs, Rankings and Other Contentious Topics in Management Education
This session was led by Alex Chisholm (one of GMAC’s resident stats gurus). Unlike the usual sort of numbers we often see from GMAC (about test taker volume, interest in the MBA), Alex used his segment to delve into several contentious topics like admissions consulting, rankings, MOOCs and the future of the brick and mortar MBA. What I found most interesting about this session was Alex’s ability to use a wealth of GMAC-collected data to provide a helpful and informed backdrop to the discussion. I was also surprised by the audience’s comfort level with some subject areas that have traditionally been rather contentious (the notion that management education is indeed an ‘industry’, that admissions consultants and rankings are part and parcel of that industry and so on). 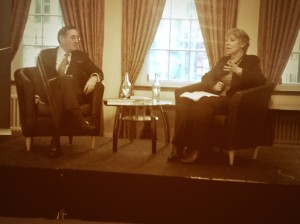 David A. Wilson from GMAC and Della Bradshaw from the Financial Times chat about the future of management education.

Closing Keynote: An Interview with Della Bradshaw by David A. Wilson
This session was the perfect way to wrap up the conference. It featured Della Bradshaw, a veritable superstar in the world of management education media coverage thanks to her work for the Financial Times, and Dave Wilson, GMAC’s outgoing CEO (who has led GMAC for more than 17 years). Due to the level of candor and comfort displayed by both Della and Dave, those of us in the audience almost felt as though we were eavesdropping on an informal chat about management education between two of the great thinkers in the space.  Over the course of the interview, Della made some very interesting observations about the state of the MBA and where she feels it is heading:

While the GMAC EMEA conference amounted to two days of great discussion about the future of management education it certainly made it clear that schools will face no shortage of challenges as they seek to recruit and assess the very best candidates in an increasingly competitive and highly global marketplace.