Posted on January 7, 2014 by Graham Richmond in News No Comments 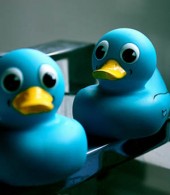 Twitter Tactics: The following tweet (pictured below) was retweeted by INSEAD.  While it’s clearly a positive tweet (highlighting the school’s success in crafting popular business case studies), can anyone see a potential problem spot? 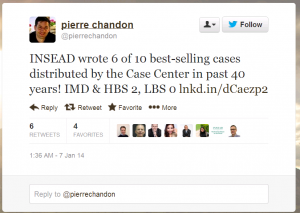 In my view, the element that gives me pause in this tweet is the ‘bestselling cases’ tally for one of INSEAD’s chief competitors, London Business School (“LBS 0”).  In short, it makes sense to feature the tally for Harvard Business School and IMD – who both had cases on the bestsellers list referred to in the tweet, but it seems gratuitous to promote the fact that a competing school did not show up on the list.

In many ways, this is actually a good example of the difference in tone from one twitter feed to another.  It’s probably fine for Pierre Chandon – who is on INSEAD’s faculty (and who used to be on the faculty at London Business School) – to engage in a bit of academic gloating, as he might enjoy the friendly rivalry between his former employer (LBS) and his current employer.  At the same time, his tone here doesn’t quite work for INSEAD’s main Twitter feed.

So assuming you agree that the original news about INSEAD’s results on the ‘bestselling cases’ list is good, how might the school have taken a different approach with this tweet?  The answer is that they could have used a MT (Twitter-speak for ‘Modified Tweet’) in which they tweeted @pierrechandon‘s post – but left out the part about LBS, thereby eliminating the chance that they could be accused of gloating.